While I was rather dismissive in my blog post from 2015 about the Begorett velomobile, it seems they took their time and came quite a long way since then. 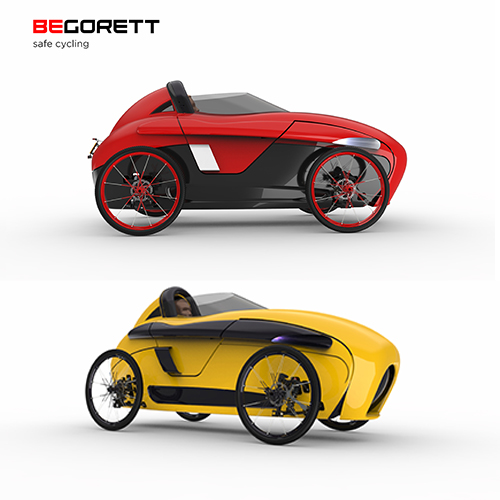 From the looks of it, the Begorett design might even be more practical than the Scheffler Bio-Hybrid, the Podbike, or the Eurocircuit Quadvelo. Much better looking too! 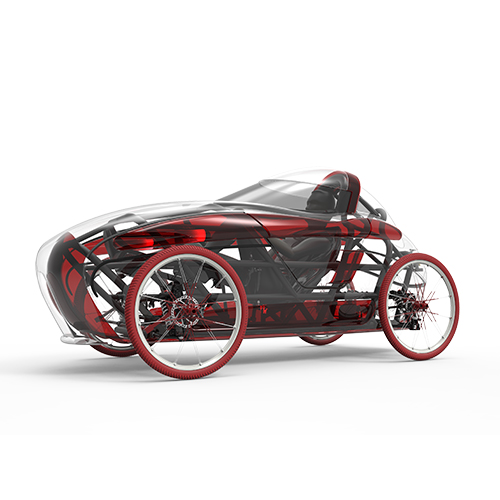 Since Begorett recently started to build a prototype, I’m pretty sure they might change a thing or two, though. The huge angled visor will be a problem in rain (especially at night!) Riding 7,500km in the Milan taught me a thing or two about visors. The rear disk brakes seem awfully exposed to water and dirt flung at them from the front wheels, as well. 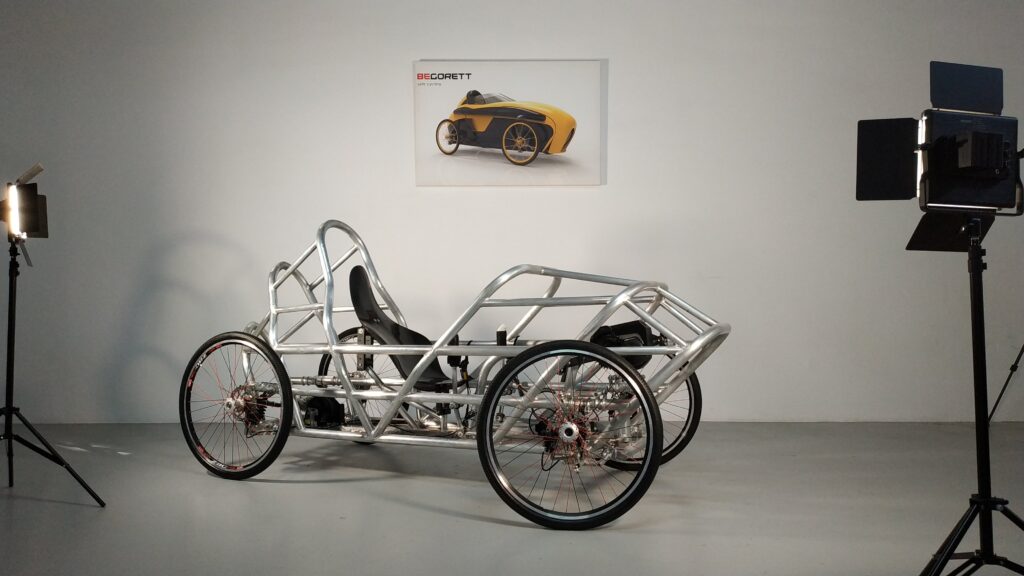 They might also find out, that its just a bit too wide (they initially stated an overall width of 1.08m in 2015) to be practical when riding on a bike path.
I’m also not sure how they want to fit a 7″ touch screen display inside (like stated here). There is simply no physical space available for a big display in a velomobile.

Anyway, I wish them well and hope they get production-ready in the near future. If I find myself riding around in Catalonia with my Milan, I will definitely try to visit them in Reus (near Tarragona). According to Google Maps it would be a 2,001km ride, though. :))

Benno invited us for the “Year beginning tour” to the nice Il Lago restaurant in Bremen.

We met again at his place, where velomobiles where already piling-up in his front yard when I arrived. Since I still didn’t figured-out to master my “new” Garmin eTrex, I missed the last turn, got lost in the boonies and circled around between the fields just one or two kilometers from his place.

Since Romain had to come without his Milan SL from Hamburg (it didn’t fit into his car), Henning from Velomobil.net lend him his Milan SL MK5 for the tour. 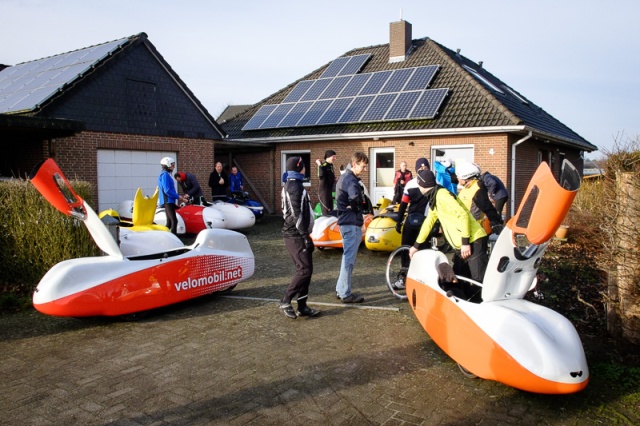 Velomobiles in the boonies. It was raining for several days before and we weren’t the only people on these little streets between the fields who enjoyed the nice weather. We met several groups with hand carts filled with beverages (most likely the “spirituous” kind), who enthusiastically cheered at us. 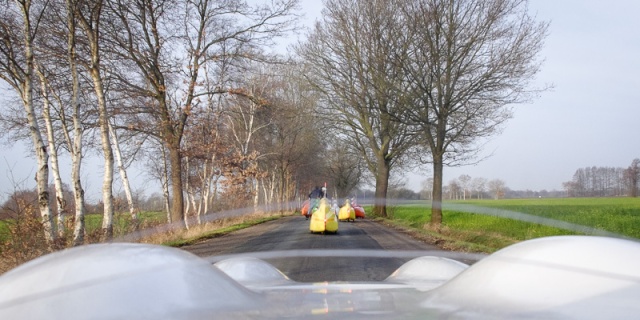 Convenience break. I stupidly didn’t take the chance and barely made it to the restaurant. 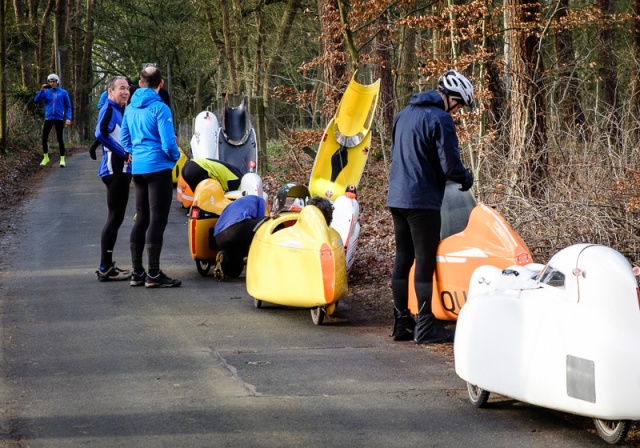 Benjamin in his Milan and his wife in her Leiba Classic 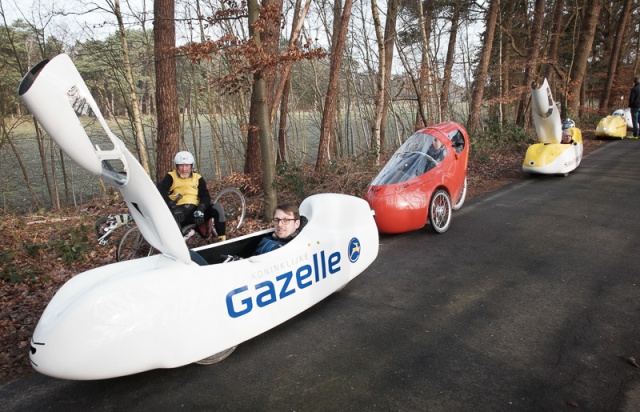 I’ve never seen a Leiba Classic in person before. It looks quite cute! 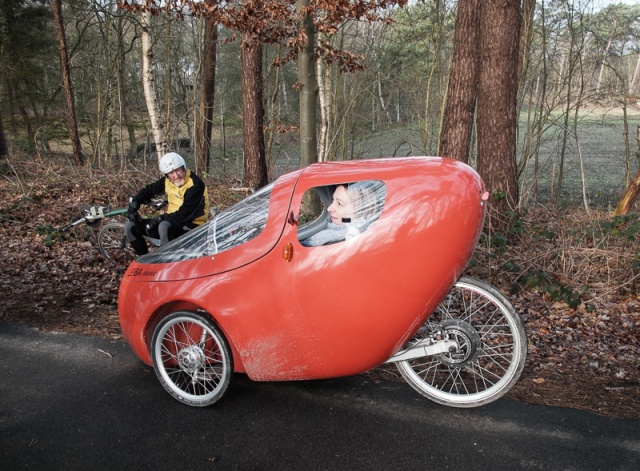 Velomobiles on the road. Almost all drivers where very patient and courteous. Only one SUV driver insisted to become the jerk of the day by overtaking on a narrow street and driving slowly into the oncoming traffic. Nothing happened, though.

The pier at the Il Lago was filled with two dozen velomobiles and one lowracer. On display where several Mango, Strada, Quest, Quattrovelo, DF, a Leiba Classic and a Alleweder A4. 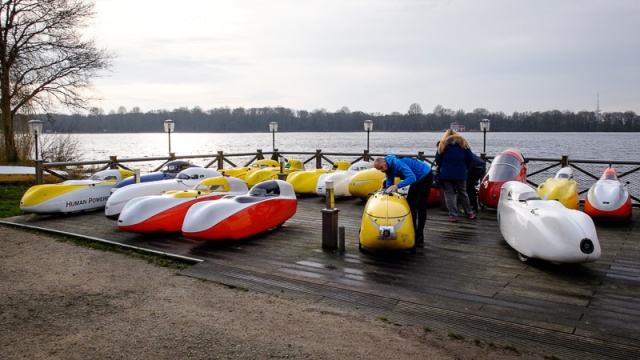 Half the velomobiles where a wide range of Milan versions. Probably every version from an early Milan from 2007, to the newest Milan SL Mk5 and Henning’s 3 week old GT Mk5. 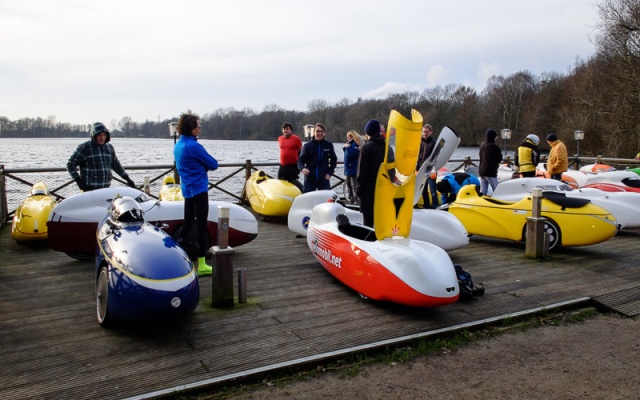 Second half of the tour back to Benno’s place

While the tour was just 57km long, including the ride to Bremen and back to Hamburg, I’ve traveled 276,1km at a 39,1km/h average that day.

Like always, lots of thumbs-up and co-drivers taking photos. Only two or three cars overtook a bit too close for comfort and an irritated DHL driver honked as he passed by.
I lost him when he drove his dirty DHL-truck at nearly 60km/h through a 30km/h zone.

I’ve got a quite rare, unused, Trice 26″ rear frame for sale. Made from Columbus CroMo steel tubes and green-metallic powder coat. It will fit in Trice/ICE Trikes models up to 2006. Like the Trice XL, Trice XXL, Trice Mini, … Continue reading →

Today we did a little tour with five velomobiles to Amelinghausen to get some cake. 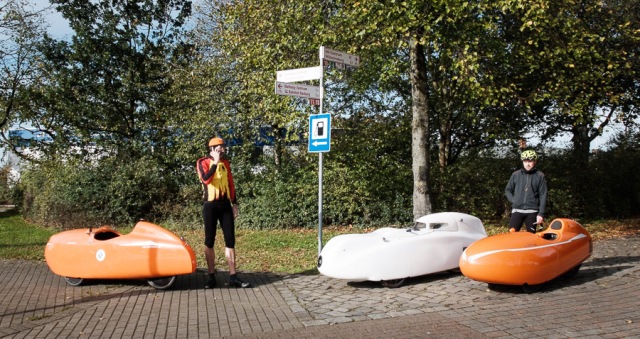 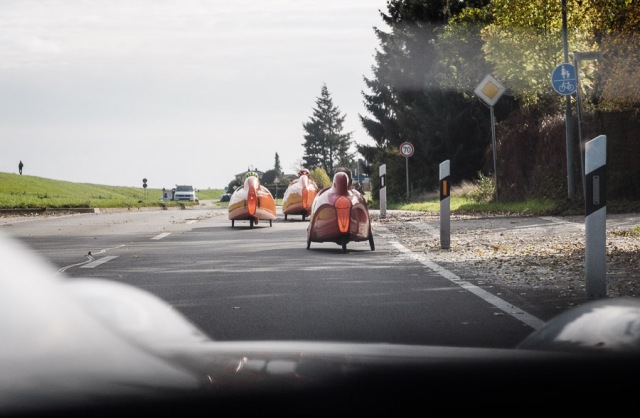 Olli’s Mango had some trouble with a few loose screws at the front suspension. Hence, we stopped and did a little roadside repair session. 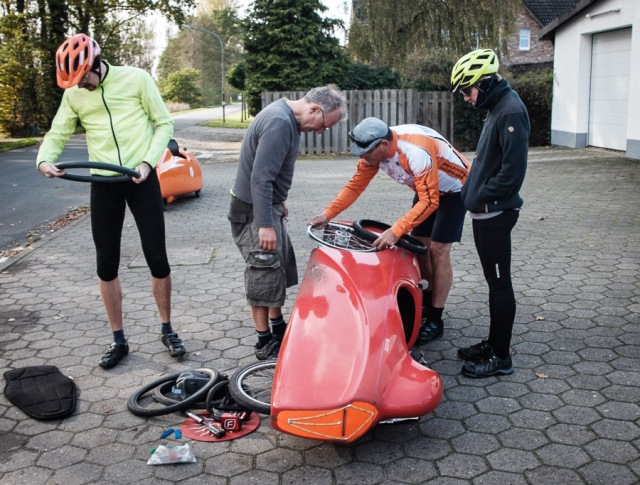 While at it, we changed a worn tire. Quite amazing how many tools, tubes and spare tires five velomobile riders have between them. The new Fumpa pump came-in real handy 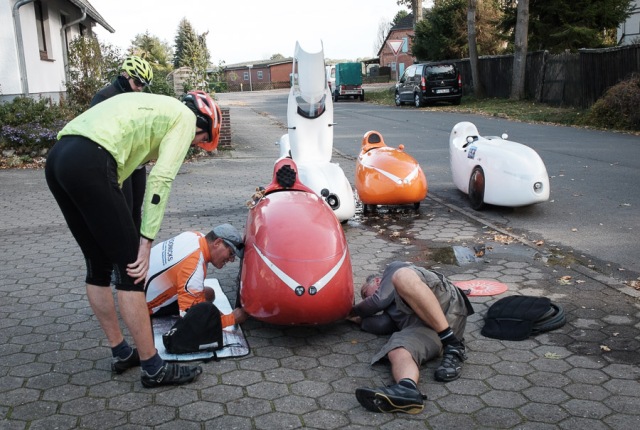 Jörn checked toe-in and since the wheels where misaligned ‘slightly’ (8mm toe-out!) it got corrected as well. No wonder poor Olli nearly killed himself by keeping-up with his Mango.

Today, I had my third police stop near Wandsbek Markt.

I waited in a small one-way street at a traffic light, when a police officer approached from the side, asked me to step-out and park the velomobile at the curb to answer a few questions. I complied and was suddenly surrounded by half a dozen friendly officers.

The officer in charge, a few years older than me, spoke with a heavy Hamburgian accent (you don’t hear that local accent very often in Hamburg anymore. As a born Hamburgian, it reminded me of my childhood and gave me kind of a warm, fuzzy feeling). Very correctly and with very particular questions, he inquired about the velomobile and its legal status.

After answering to his satisfaction, we started to chat a bit. He told me, a few weeks back he had seen the velomobile, turned his patrol car and tried to catch me, but I was already gone. When I told him that the encounter was just two kilometers from my home, the street heads a bit downwards and I usually break the 50km/h speed limit by a good margin to catch the next traffic light, he smiled. He was fully aware, that the 50km/h city speed limit doesn’t apply to cycles*. A few images later, the officers wished me a safe journey and off I went.

Looks like I don’t have to visit the local police station, to introduce that strange, new vehicle in their district.

*thats right! According to §3 STVO (German road traffic law), the mandatory speed limit of 50km/h inside city limits only applies to motor vehicles. Since a cycle is explicitly defined as a vehicle by the STVO, in Germany you can go as fast as you please** in a velomobile. Sometimes you just have to love legalese!
**well, sort of. Obviously the cops can still charge you with reckless driving if you drive too fast for the traffic situation at hand.

I’ve heard before, that the Flevo shop is a bit hidden. No kidding! 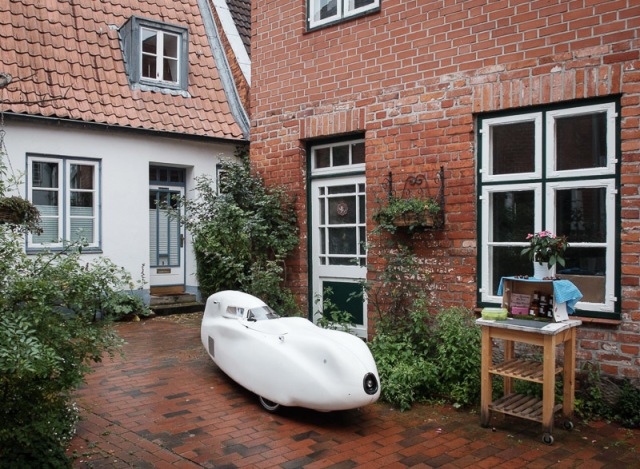 You can only see the Flevo shop, if you stand right in front of it. 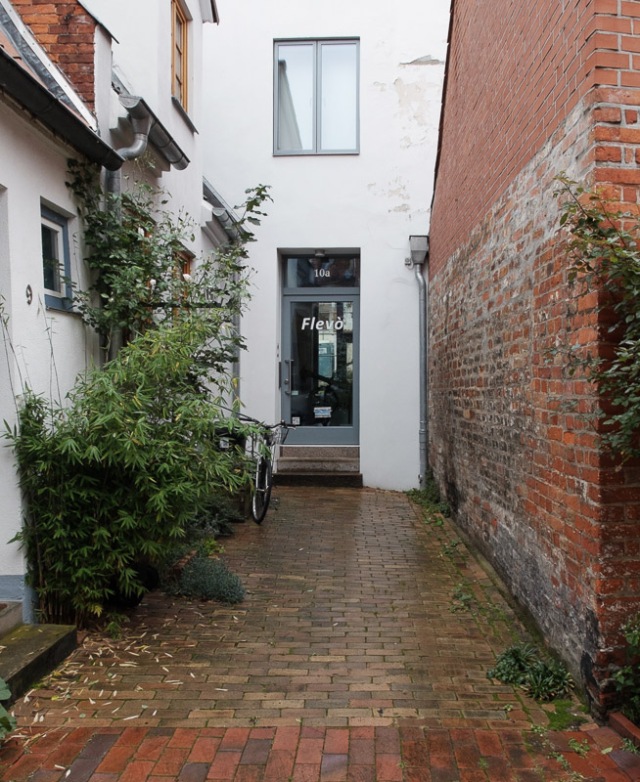 The little back yard, in the middle of these centuries old houses, is absolutely adorable. 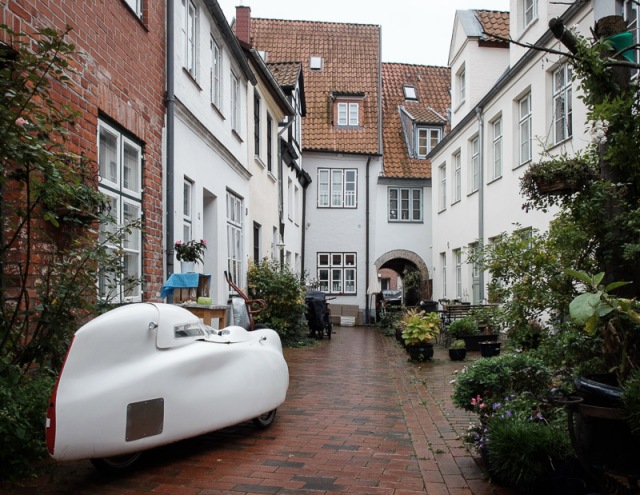 On the way back, I came in a rain shower. Despite regularly using some anti-fog, the Milan visor fogged-up within minutes and I had to take a break at a farm shop. 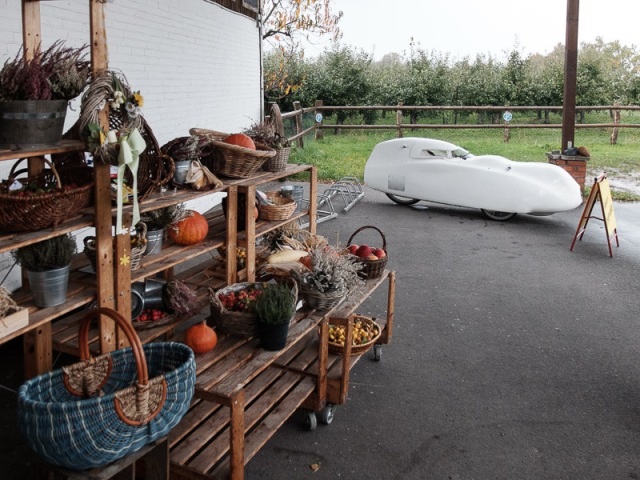 The farm is quite famous around here, since they grow their red potatoes on trees 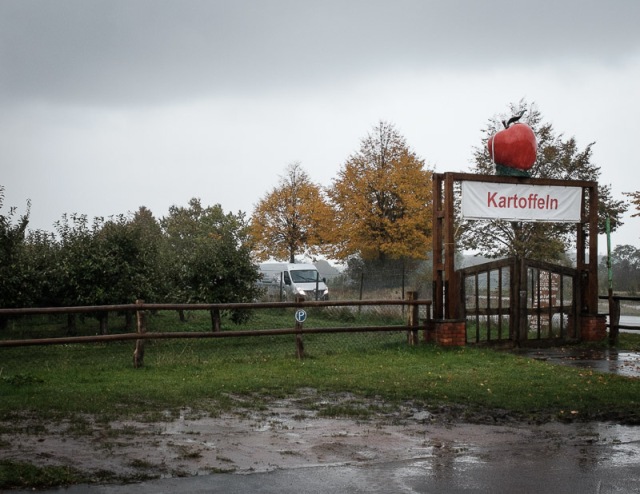 Anyway, while the Radical cover is actually custom made for the WAW velomobile, it just fits the Milan GT as well. Its a bit loose at the front of the nose, though. 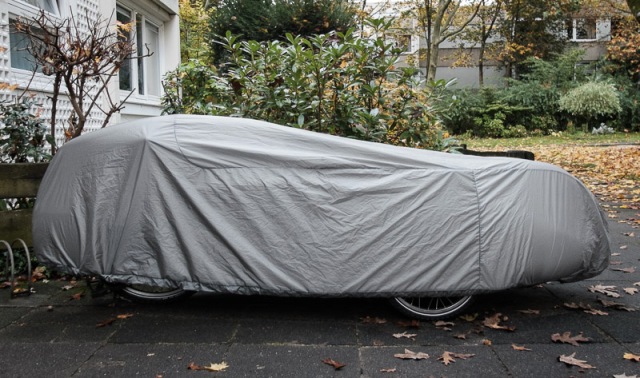 The Milan is still shod with Marathon GT 365. While their grip on wet roads is absolutely stunning (I can break hard at any speed in rain), they are kind of slow.
The Milan consumed roughly 30% more energy on this trip (125km with a 40.3km/h average) than I’m used to (a whopping 9.9Wh/km instead of 6-7Wh/km*) and the battery ran dry two kilometers from home. Tomorrow the quicker Maxxis DTH go back on the front wheels and the GT 365 will be used for winter commuting.

Jan Wijnen from Velomobiel.Ro posted a really nice video about the Alpha 7 production.

More about the Alpha 7 velomobile at velomobileworld.com

So far, I’ve tried several tires with the Milan. As usual, I can’t say much about the rolling resistance of these tires (no power meter) and since there is a small hub motor in the Milan, I’m most concerned about … Continue reading →

Since I’ve experienced a loose axle screw on the left front wheel of the Milan on my commute, I’ve drilled-out the M6 thread and put self-locking M6 HeliCoil screwlock inserts in. The screwlock insert isn’t really necessary for the right hand axle, though. 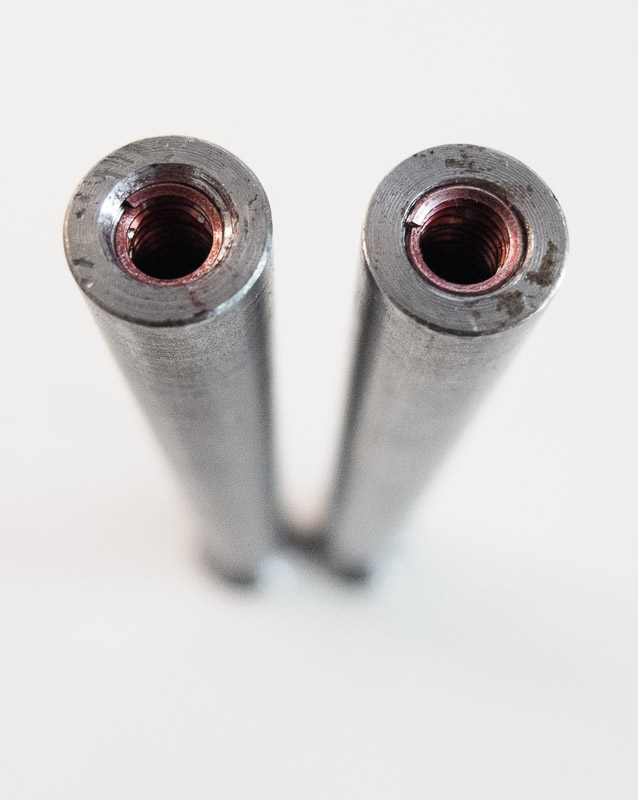 While others usually suggest medium-strength Loctite thread-locker for the axle bolts, I’m not fond of using Loctite on fasteners I have to unscrew regularly and think the HeliCoil screwlock thread inserts are the best solution in this case (I’ve got a wide range of Loctite products at hand, use them for decades at work and even got the proper training to use them in aviation or public transport maintenance).